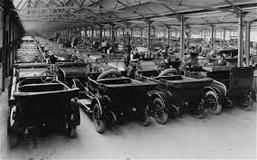 At this time Morris expanded and updated his factory spending over £900,000 which included installing a mechanical conveyor line replacing the manual system that had been in place since he first visited the US.

In 1934 the Morris 8 joined the family. It was really the first of the ‘Series’ cars, it was well engineered and well built and sold well, soon passing the Austin Seven. The Series cars also represented Morris trying to change customers’ habits. Morris had adopted the American system of yearly updates for his cars. For many years the annual Motor Show was used to launch new models with customers putting off purchases until the show. This made it hard for manufacturers as well as dealers. So in 1935 Morris announced that henceforth his vehicles would be known by a ‘series’ number and would be released through out the year when best fitted in with commercial realities. Alec Issigonis joined Morris from Humber in 1936. His engineering brilliance and design creativity was seen in many subsequent models and his influence is still seen in cars today.

Nearing the end of the thirties William Morris, who was now Lord Nuffield, foresaw the war and worked on establishing aircraft, aircraft engine plants and tank factories all using his own money. During the war years, Morris also built trucks, armoured vehicles, gun tractors, Bren-gun carriers, mine sinkers, as well as repairing aircrafts and building Tiger Moth trainers. This activity however, resulted in the car business taking a back seat.

With World War 11 finished the Company went through a period of reorganisation, the aim of which was to clean up the management structure and condense manufacturing facilities. Riley production was moved to Abingdon (MG works) Wolseley to Cowley. The ex Riley factory (in Coventry) became engine manufacturing only and ex Wolseley factory in Birmingham became a machining shop. There was even consideration to merging with Austin but that did not eventuate until 1952 when The British Motor Corporation was formed.

In 1948 Morris first all new post war car arrived and it was the most advanced model the company had ever built, the Morris Minor. With unitary construction, independent front suspension, a new 947cc side-valve engine, four speed gearbox. The Minor’s success led to a long waiting list with customers often waiting many months for delivery.

The formation of BMC saw Austin and Morris models sharing parts. As an example the Morris Minor gained an Austin engine which the grew to 1000cc. In 1955 the Morris Isis was brought back again with an Austin engine. The 1959 Morris Oxford was almost entirely an Austin design. Sharing its Farina designed body with the Wolseley 16/60, the Austin A55 and the MG Magnette it was fitted with the Austin B-series 1489cc engine.

Then in 1959 Alex Issigonis’ masterpiece was released- the Morris Mini. Although built at the Morris Cowley Works as a Morris and at Longbridge, home of Austin, as an Austin the Mini was mainly a Morris. This vehicle with its front wheel drive, east west engine and rubber cone suspension set the agenda for small car design for many decades to come. The Mini was followed by the 1100 and then the 1800.

Although these were good years in terms of sales the Austin/Morris merger did not go as smoothly as it could have. Here were two large companies who were at one minute opponents and the next best friends. Rivalry at a dealer level continued as well as in the new companies management and workshops. In 1968 Leyland Motors, also a result of merged brands, took over and the whole company became British Leyland Motor Corporation.

In 1971 the Morris Marina was launched in the UK and after a major facelift in 1980 it became the Morris Ital and was produced until 1983. It was the last passenger vehicle to bear the brand ‘Morris’ although MGs continued to be manufactured until 2005. The MG name continues as a Chinese built range owned by SAIC. 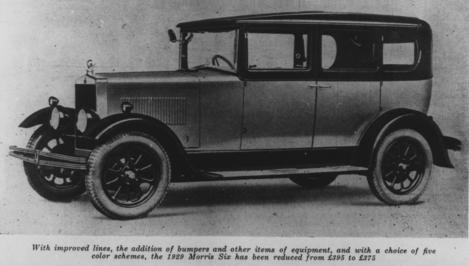 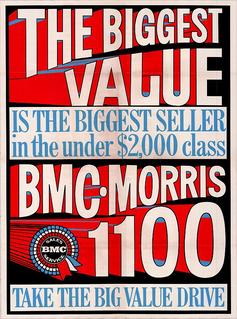 2013 celebrated 100 years since Gordon Stewart of Stewart and Arderns picked up the first ‘Morris’ car from Oxford. William Richard Morris was the originator of volume production in Great Britain. He also became one of Britain’s greatest benefactors.

Morris progressed from making bicycles to making cars and by October 1912 press reports carried descriptions of the forth coming new ‘Morris’. In the beginning Morris intended to purchase as many parts as he could from suppliers and then assemble the car. By controlling the quality of the parts he reasoned he could control the quality of the final product. As such the first car had a motor and gearbox by White and Poppe, axle by E.G. Wrigley and Co, Sankey supplied the wheels, Powell and Hammer provided the lighting, and Bosch the magneto. Morris was a gifted mechanic but not a designer so Hans Landstad designed the engine gearbox and chassis. Landstad later became chief designer for Morris.

On the 23rd of march 1913 Gordon Stewart picked up the first car of his initial order of 400 Morris Oxfords. By the end of 1914 Morris had agents across Europe and in the Colonies. Morris realised that his Oxford was limited by the fact that it was a two seater. Acknowledging that a 4 seater would require a larger engine, Morris made a number of trips to America look for other suppliers and to inspect t US manufacturing processes.

Morris also placed large contracts with two British suppliers which possibly set their agenda for many years, Lucas for lighting and Smiths for instruments. Morris was certainly the first manufacturer in the UK to use external suppliers on a large scale. Where ever possible he used British suppliers but sometimes he had no choice but to buy from overseas. This system proved to be economically correct in those early years as Morris outlasted many other manufacturers that produced much more of their cars themselves. Morris controlled his suppliers to ensure the quality he wanted and often supplied jigs and tools. He had no hesitation in buying out his suppliers if he thought he had to protect his supply chain. Some of the suppliers Morris acquired over time included Doherty Radiators, Hollick & Pratt, Hotchkiss and SU Carburettors. 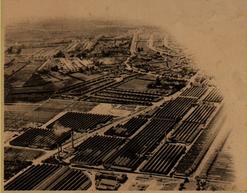 The post war boom came to halt in 1920 when Morris experienced a drop in sales of over 75%. The cost of materials had pushed the price of cars up and when sales stopped many manufactures, including Morris, found themselves over stocked. When Morris saw that the slump was not temporary he slashed the prices of his cars. His strategy worked. As the total UK production dropped Morris sales increased. Morris was soon the leading brand in England. During this time some of his competitors closed shop while others merged and became bigger businesses who worked on improving their cars. A new petrol tax in 1928 effected Morris sales. His top sellers market segments soon dropped as a portion of the total market. So Morris moved his Oxford up market and actioned plans he had nurtured for some time. These plans were for a small car to go head to head with Austin’s Seven. This became the Morris Minor. The Minor was a sales success and was the basis of the first MG Midget M-type. 1930 & 1931 saw another slump but Morris had enough reserves to last through it. 1932 saw car sales increase and by 1934 sales were back to 1929 numbers. Part of the turn around was the release of the Morris 10. Morris had also launched the £100 Morris Minor. This two seater car featured a side valve 4 cylinder engine. In many ways it was the car of its time. It was well engineered, cheap to buy and the engine design fixed the issues of the earlier Minor’s overhead camshaft design. This engine eventually featured in all the Morris 8hp range.  As Morris’ range extended the vehicles suffered from his previous one-model policy. They shared many common parts and were renowned for not being well developed but they still sold well. 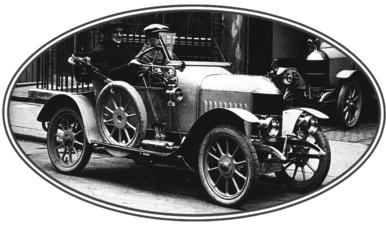 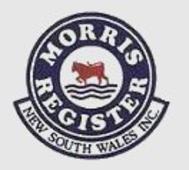